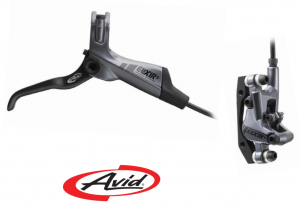 Over the past couple of years I’ve tried to bleed the brakes of my Hayes Elixir 3 hydraulic brakes several times. I’ve had some OK success but rarely was I able to do a really good job. I watched lots of videos on YouTube, read the instructions, searched for posts on internet bike forums, and talked to wrenches at bike shops. The videos and instructions make the task seem easy, the forums and bike mechanics make the task seem difficult. It turns out that what is really needed is patience and perseverance, which I’ll give a bit more detail on at the bottom of this post. These were two things that I’ve never seen discussed on instruction videos or manuals.

To bleed Elixir brakes you need only a few tools, most of which come with the Avid bleed kit. You use two syringes, a brake block for keeping the brake pistons separated, a torq wrench for the bleed port and a few other odds and ends like cloths and some kind of strap for holding your brake lever closed.

Here is the manual: https://www.sram.com/sites/default/files/techdocs/e1_e3_service_manual_rev_b.pdf

And finally, here is the advice that you need to be successful. When you go to bleed the brake lever, you have to keep working at this for a long time. The Hayes design is such that a large amount of air will get trapped in the lever and unless you’re very patient and careful, you’ll think you’ve finished the bleed job prematurely. This is where I got caught over 1/2 dozen times. I would bleed the lever until virtually no air bubbles were being produced and stop. This always gave me a soft/bad result. The last two times I did it though, I kept pulling on the lever syringe with a lot of force, even though it looked like I had gotten all the air out. Sure enough, a few more huge air bubbles would eventually pop out.

Prior to the above, I was being super careful with following the instructions: making sure the lever was 75mm from the handlebar, etc. However, it all came down to keeping pulling on the lever syringe pretty much as hard as I thought I could without pulling the plunger out. So if you’re having problems bleeding Elixir brakes, maybe it’s time to try again and really be patient with the lever bleed. Good luck!