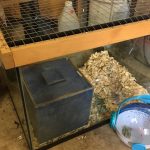 I have a gerbil “cage” for sale. I call it a “cage” because really, if you were a gerbil, you would think that it is a palace. Or at least a really, really nice home with two bedrooms and a bathroom.

It’s quite possibly the best gerbil palace out there. I know lots of people that want it, like my friend Phil. His real name isn’t Phil (it’s Dave) but I don’t want to use his real name in case he gets upset. Anyways, Phil says to me he says, “Doug, can I have your gerbil cage?” My first response was to point out that it wasn’t a cage but a palace. I then reminded Phil that he doesn’t even own a gerbil and he has no intention of getting one. Phil agreed but said that it was the best damn gerbil palase (sp) that he’s ever seen. Phil also isn’t a very good speller but I don’t hold that against him.

Phil isn’t the only person that wants it. Like most people, I know several gerbil breeders and gerbil experts. They all want the palace. My fear is that they’ll turn it into an Air BnB for gerbils. While I can appreciate the upscale gerbil business, I’m more of a grass roots kind of fella.

The palace is made out of glass so you can fill it with wood shavings or other filler material and the gerbils will build tunnels that you can observe. It also has a ceramic den with a removable shelf. There’s no plastic for the gerbils to chew on.